In one of my previous posts (from a long time ago), I started talking about prayer as a spiritual discipline and I ended up discussing some of the pitfalls of prayer. Well, because I am trying to follow Jesus, I very quickly find myself asking, “How did Jesus pray? Under what circumstances? How did he teach his disciples to pray?” So today, I would like to take a quick look at some of Jesus’s prayers and what we learn from both his teaching and his example. Note that this is not exhaustive.

From the beginning of his ministry, Jesus was a celebrity in his day. When he traveled to a town, many crowds would come out to hear him speak and to receive healing from him as he traveled. In other words, everywhere he went there were people who wanted to knock on his office door (if he had had one) and talk to him. Yet according to Luke, Jesus “often withdrew to lonely places and prayed.” Whatever he had going, whatever pressing concerns or tasks he had to do, Jesus understood that speaking to and hearing from God his Father was essential for the health of his own heart and mind, not to mention that he could not accomplish his mission on Earth without the power of his Father.

In the story of Jesus raising Lazarus from the dead, we see a particularly striking passage where Jesus, having asked that Lazarus’s body be exposed to the light of day for his impending resurrection, Jesus prays out loud to the Father: “Father, I thank you that you have heard me.  I knew that you always hear me, but I said this for the benefit of the people standing here, that they may believe that you sent me.”

This seems like a strange prayer to say. Is this not similar to how the Pharisees prayed – out loud, in public, for all to hear? The key difference here is the motive. The Pharisees prayed out loud so that their particular brand of hollow piety could be admired by their listeners. Jesus wants to reassure his audience that yes, he really is a representative of the Father, and yes, the miracle he is about to perform is endorsed and empowered by the Father. In so doing, his motive is to build the faith and trust of others and give ultimate glory to the Father.

After referring to Jesus’s consistency in prayer with God, Luke then reports to us that Jesus spent one whole night away from the disciples in prayer. When Jesus returns, he then proceeds with selecting his Twelve Disciples, those who will follow him more closely than any others for the rest of his life, both as his disciples and his closest friends. Although we are not privy to what Jesus prayed, it is natural for me to suppose he was praying about this very important decision he had ahead of him, likely asking for wisdom as he chose his closest followers. It sounds strange even to my mind that Jesus himself sought wisdom in order to make the best decisions, but I think that is in this text: we see that Jesus looked to his Father for wisdom in making difficult decisions.

When Jesus was going through his darkest moment in the Garden of Gethsemane, his reaction was to pray. The most extraordinary part of this prayer is that he says, “Father, if it is possible, let this cup pass from me.” He knew what was coming, and he wanted to avoid it. If you believe in love as a feeling or an emotion, then it doesn’t seem right for Jesus to be so emotionally conflicted about giving his life. This is how we know that love – true love – is a choice. Jesus was laying down his life, and in that moment he knew his future was going to bring a lot of pain and suffering. Not only was he confident and trusting enough in his Father that he was willing to go through with this, but he willingly put his life in the hands of God.

Arguably, one of the most important prayers for a Christian is what is said in the Lord’s prayer: “Forgive us our debts (or trespasses) as we forgive our debtors (or, those who trespass against us).” Jesus taught us in the Lord’s prayer that our salvation is conditional on our forgiveness of those who have wronged us. Jesus modeled this for us on the cross. He asked the Father to “forgive them; they do not know what they are doing.” Who is “they?” On one hand, it’s easy to see: the Pharisees who had conspired to get Jesus crucified. But it could just as easily be Pilate, who saw that an unjust execution was going to take place and literally washed his hands of it. Or it could’ve been his disciples, who abandoned him at the most difficult moment in his ministry. Or it could’ve been me, since before Christ I lived in such a way that was as much of a betrayal of Jesus as the disciples.

I think that “Forgive them, for they do not know what they are doing” was for all of us. That was the institution of the new law of grace – the new covenant. If nothing else, that tells us a great deal about the power of forgiveness and the power of prayer.

I have just finished writing in a spiral notebook that I have entitled “Thankfulness Items/ Daily Thankfulness.” It’s nothing special. It’s just a notebook where, in the past, I have tried to write a small bullet point every day detailing something I am thankful for. There are notes in this book stretching back over a year, but for the last few months I have found it more difficult to have this very simple moment of thankfulness for the day I have just experienced. The last time I wrote in this thing was three months ago. I was just too busy.

That is to say, I didn’t make the time. Every so often, I get into this mindset that I am a victim of my schedule, of my circumstances, of my indiscipline. But I think it’s more honest to say that sometimes, my priorities get out-of-whack. There’s no guilt in that for me, at least not the weight of guilt and shame. It makes me think of the Israelites wandering in the desert for 40 years. Even when they had God’s ongoing provision and miraculous presence with them, they still occasionally grumbled and complained and forgot to be thankful for what was right in front of them. I know that at certain points in the past, I thought that was extraordinary. In truth, for the sake of my feelings on thankfulness, the Israelites are like us. I’m not fundamentally different than those people. I too struggle sometimes to be thankful, even in spite of God’s activity in my life and the lives of others.

I don’t really have any other specific thoughts to share today. Just remember to be thankful, in whatever way that works best for you. I do recommend having pencil and paper where you can write down what you are thankful for; there’s something much more concrete and contemplative for me about writing vs. typing something into a computer. But if a computer works better for you, go for it. Just take the time to be thankful.

A Season for Silence

For everything there is a season, and a time for every purpose under heaven… a time to be silent and a time to speak.

I’m not sure why I’m here. That is to say, I have started blogging before. Inevitably, I find myself feeling like I was just adding to the noise. That’s a phrase from an old song Switchfoot song: “If we’re adding to the noise/ turn off this song.” I kind of appreciate the honesty of that song, because it is essentially asking you not to listen to it if it isn’t serving a purpose. Truthfully, my past blogging efforts felt relatively meaningless. At the time, I was barely out of college, had barely started my life as an adult. I was finding my way, so why on Earth should anyone put any weight behind my thoughts or opinions about much of anything? On whose authority could I broadcast my thoughts or beliefs or opinions to the wider world, as though I knew something about anything?

This was an especially acute feeling when it came to matters of faith. To be blunt, I’ve lived a pretty cushy life as the child of well-off parents in a very wealthy country at a very privileged time in world history. What challenges have really confronted my faith? I mean, really tough matters that really forced me into the uncomfortable position where my faith might actually be in jeopardy if the challenge was not met? Anything I gave to answer that question rhetorically seemed laughable by comparison to the real-life struggles of lots of people. What possible comfort or guidance or Christ-inspired wisdom could I offer when I was working from such a position of youth and inexperience?

Of course, the New Testament does offer a possible answer to this…

Let no one look down on you because of your youth…

That is Biblical. However, when it comes to my attitude toward myself, I tend to be my worst critic. It’s easier for me to apply that teaching to others than myself, to undervalue my own contributions. Putting all of these disparate pieces together created a season of my life where I occasionally blogged, particularly about my faith because of its importance to me, but inevitably my blogging ran dry. This was usually either a feeling that I had nothing worth saying, a despair that no one was listening even when I did speak… or a fear that someone was.

A Season to Speak

In spite of all of those personal doubts, which persist and likely always will, I have felt the winds shifting lately. The season for silence seems to be coming to a close, and for reasons I cannot really describe or even pin down myself, it feels like now is the time to begin again. But there will be some differences.

For right now, I am not going to try to enforce any schedule upon myself. I will blog when I feel the desire to. My rough goal is to have something to publish every few weeks, but that’s a very soft schedule. This is literally just a trial run for now, to see if this is something I want to do, how much investment it will require from me, and whether there is an audience for my ramblings.

Secondly, as if running a single blog isn’t enough, I’m launching two others. Yes, seriously. One blog – which I just posted to yesterday – is going to be a geek-centric blog where I write about movies, television, and various other things. (For instance, my first blog post describes my frustrations with a popular first-person shooter game.) A second as-yet unfinished new blog will cover issues of culture, politics, the news, and other things that are disagreeable, especially now. My general hope is that I will always have something to say for at least one of these blogs, but it will also allow people to engage with one side of my ramblings without having to dig through things that they might be less interested in.

So I guess the only thing left to say is… 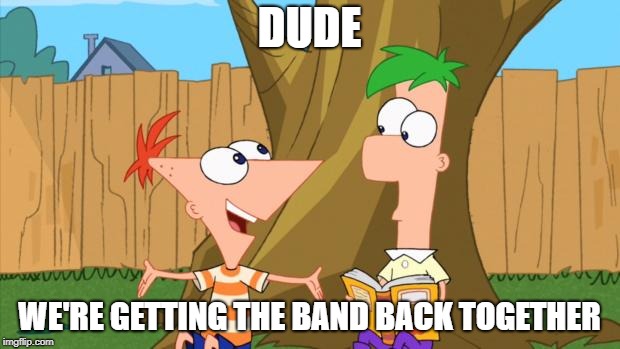